Trending
You are at:Home»English news»Experts warn that girls’ education will be worst hit, as many families are forced to move away from schools
FacebookFacebook messengerTwitterWhatsAppLinkedInTelegramEmail

Girls at school in Toghdeer, Somaliland. Many will be forced into marriage due to the drought. Photograph: Armstrong Kiprotich/Plan International

More than 3.5 million children are at risk of dropping out of school due to the drought in the Horn of Africa, the United Nations has said, amid warnings the crisis could lead to “a lost generation” that misses out on education.

According to new figures shared with the Guardian, Unicef now estimates that 3.6 million children in Kenya, Somalia and Ethiopia are in danger of leaving school as a result of the cumulative pressure on households caused by the unrelenting drought.

In a sign of how acute the situation is becoming in many areas, that number has more than tripled – from 1.1 million – in the past six months.

Four consecutive failed rainy seasons have pushed millions of families to the brink, increasing the number of deaths of children from malnutrition and forcing people to flee their homes in search of more resources.

But the drought also threatens to cause another, quieter ripple effect in the three worst-hit countries, said Abhiyan Jung Rana, Unicef’s education adviser for eastern and southern Africa.

“In the Horn of Africa, there are about 15 million children out of school, including these countries. But the fear is that because of the drought an additional 3.6 million more children will drop out as they’re moving with their parents to different areas away from their school.”

Teachers and activists in Somaliland, an autonomous region of Somalia, say they are already seeing this effect in their classrooms – and it is mainly girls who are leaving.

“When the chips are down, it is always the girls who bear the brunt of the situation,” said Sadia Allin, country director for Plan International, which is working with communities in Somaliland to help them withstand the drought.

“It is very worrying. Education provides immediate physical, psychological, and cognitive protection. For girls, being out of school is disappointing. It is impacting their dreams,” she said.

Kiin Farah Hasan, the headteacher of a village school in the Toghdeer region of Somaliland, is praying that this year will be better for the girls at her school. By the end of the last academic year, after two rainy seasons failed, only 31 of the original 56 girls remained.

“Some of the girls got married, some of them moved to other places because their parents migrated from here due to the drought,” she said. “And some of them, their families are poor and have nothing, even getting their livelihoods is hard for them.”

Kiin said she had become used to teaching hungry children. “When we wonder about them being hungry, sometimes we give them a 30-minute break and order food from the market for them to eat, and for some I even cook food in my house and give [it to] them,” she said. 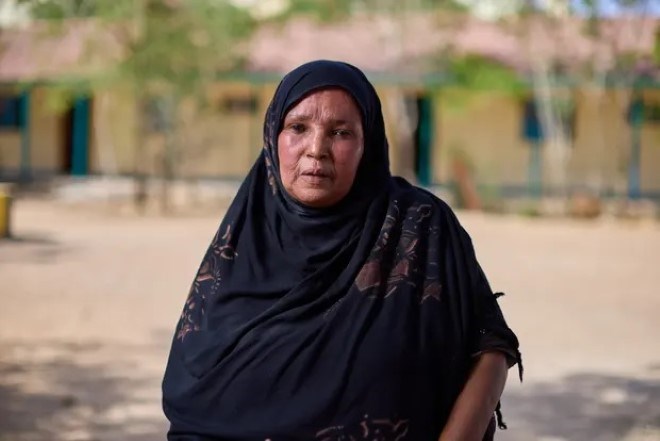 Kiin Farah Hasan, a teacher in Toghdeer, Somaliland, says she is used to teaching hungry pupils and often prepares food for them herself. Photograph: Armstrong Kiprotich/Plan International

A proper school feeding programme, along with a school bus to cover the 3-6 mile (5-10km) journey to school, would enable many of those at risk to stay in education, she said. But the absence of these, combined with the added pressure on household incomes, has stacked the odds against children getting to school.

Kiin said she believed “three or four” of the girls who dropped out had married since leaving school. “Maybe some of them got married by their own will, but that problem really affected me.”

Child marriages often increase in times of drought or disaster as parents seek to raise extra funds through dowries.

Unicef said it did not expect to see a discernible difference between the sexes in terms of the numbers of children at risk of dropping out, because the displacement of entire families, including boys and girls, was a major factor in their vulnerability.

But Jung Rana said he did expect girls to be less likely to return to school, just as in the aftermath of Covid lockdowns, which in some places coincided with higher rates of early marriage, teenage pregnancy, and gender-based violence.

“I would foresee something similar happening because, in a sense, schools are closed for them and they’re there with their parents or with their families, and these kinds of things would likely be happening more,” he said.

He added: “Girls especially are looked on in households to be able to provide the caregiving aspects … more than boys would be, in terms of taking care of their smaller siblings and taking care of chores around the home or wherever they are. I think, with those conditions, they are more likely not to go back.” 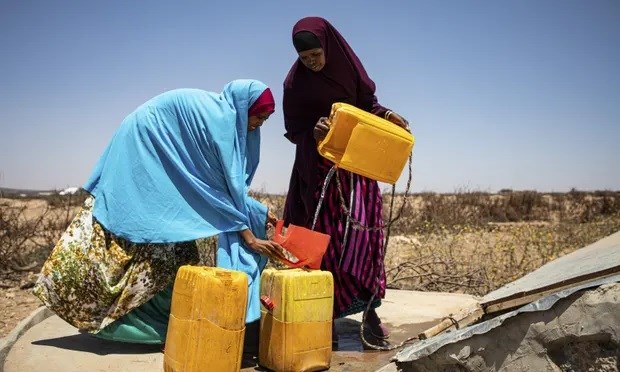 Women collect water in Xidhinta in Somaliland. An estimated 13 million people are facing severe hunger in the Horn of Africa as a result of drought, the UN says. Photograph: Daniel Jukes/AP

Speaking from Hargeisa, the capital of Somaliland, Allin said it was vital that donor countries such as the UK recognised that droughts and other crises could have severe repercussions on girls’ education, and provide funding accordingly. Liz Truss, Britain’s new prime minister, has in the past declared women and girls to be a priority.

“My message to her and to the world is that education is just such a powerful thing … and if we don’t provide these girls with the resources that they need to stay in education, it will [mean the] loss of a generation and [be] very costly in the future,” she added.

Unicef estimates that 1.57 million children – roughly equal numbers of girls and boys – are at risk of dropping out of school in Kenya, 1.14 million in Ethiopia and 900,000 in Somalia, including Somaliland.

It says factors that increase the chances of a child dropping out include the displacement of the family to other villages with limited educational capacity, a lack of school feeding programmes, and parents’ inability to afford essentials such as books and uniforms.